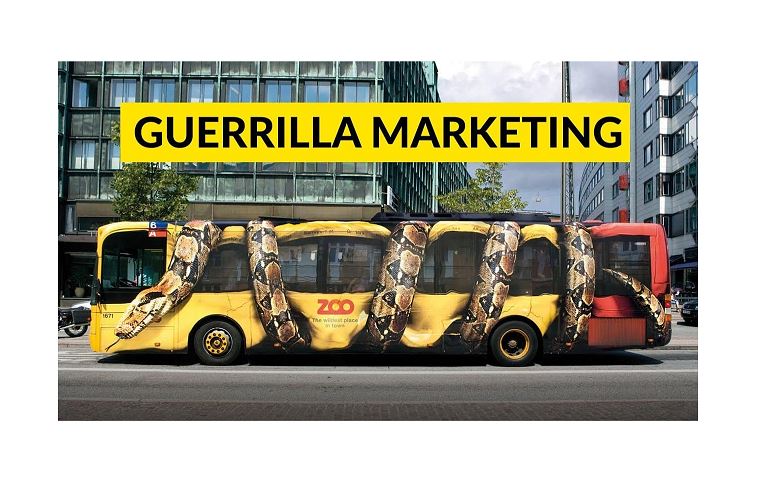 Guerrilla Marketing: The Unconventional Get the Attention

It is a marketing tactic in which a company uses surprise or unconventional interactions in order to promote a product or service.

How did this name come to be?

The name takes its inspiration from Guerrilla Warfare. It relates to the tactic strategies used by armed civilians which often included elements of surprise. Much like guerrilla warfare, guerrilla marketing uses the same tactics in the marketing industry.

It began its journey when small businesses used new unique methods to reach a broader audience with ingenuity that beats off the big budgets. For this, the campaign mostly used to take place in streets, concerts, public parks, sporting events, festivals, shopping centers, etc.

But, today, big or small, all businesses have realized its potential to make a lasting impression on a consumer’s mind and have started to incorporate the strategy in their marketing campaigns.

And with the advent of the internet, digitalization of services and social media blasts, these have been taken to a whole new dimension..!!

During one of the biggest public festivals in Switzerland, in order to gain an edge over its competitors, Mcdonald reshaped the pedestrian crossing in front of their restaurant into a portion of french fries. It is one of the most memorable street art campaigns of the brand.

It created a buzz on the street and people were made aware of hunger pangs, that they weren't even aware they had..!

2) Ambient Marketing: It is a way of promoting products or services using unusual locations or items, usually, by interfering with the flow of things.

Folgers is an American brand of coffee. The company covered manholes throughout New York City with big steaming cups of coffee. The tagline simply asked for the city that never sleeps to wake itself up with some Folgers.

This ingenious idea attracted millions walking on the street every day..!!

Anando Milk is an Indian brand of milk. To increase the milk consumption among children, they came up with a creative advertisement placed on one of Mumbai’s buildings, where a child was shown to be moving a part of the building due to his super strength.

This guerilla marketing campaign was a huge success in promoting dairy products among children..!!

3) Ambush Marketing: Here, the marketers take advantage of the audience of an event and use it to promote their product or service.

In 2020 Euros, Pringoooals, football-themed on-pack promotion helped Pringles to run their marketing campaign in over 40 countries across Europe to coincide with the 2020 Euros.

Aiming to “put the playful back in football after last season’s setbacks”, the company, did come out with one of the most creative strategies ever.

In Zurich, during the 2018 FIFA World Cup, Coca-Cola placed a VR experience in front of a train station.

With the experience, one could stand in front of a screen and see a popular soccer player next to oneself. And, practice a soccer move with the athlete or compete in one own mini soccer tournament.

With the use of Virtual Reality it made the audience have an immersive experience, aided by Coca Cola.. People went crazy taking pictures and making videos..!

5) Viral Marketing: It involves such campaigns that spread faster than wildfire, usually with the help of content marketing.

Chumbak launched its #BobbyMissing campaign to promote the opening of their New Delhi store to create a buzz and engage with their customers and fans on social media.

They used a character from their popular Bobbleheads collection and constantly updated their social media pages with images announcing the spotting of the missing Bobble Head Bobby in various big events and cities, which got them good traction on social media.

So what are the benefits of these unique marketing strategies..?

Conclusion: The effective use of Guerrilla Marketing by the companies has shown the potential of the marketing strategy to work wonders. By keeping the ingenuity at the top, startups can pull off stellar impactful marketing campaigns, that too, while keeping it cost-effective.